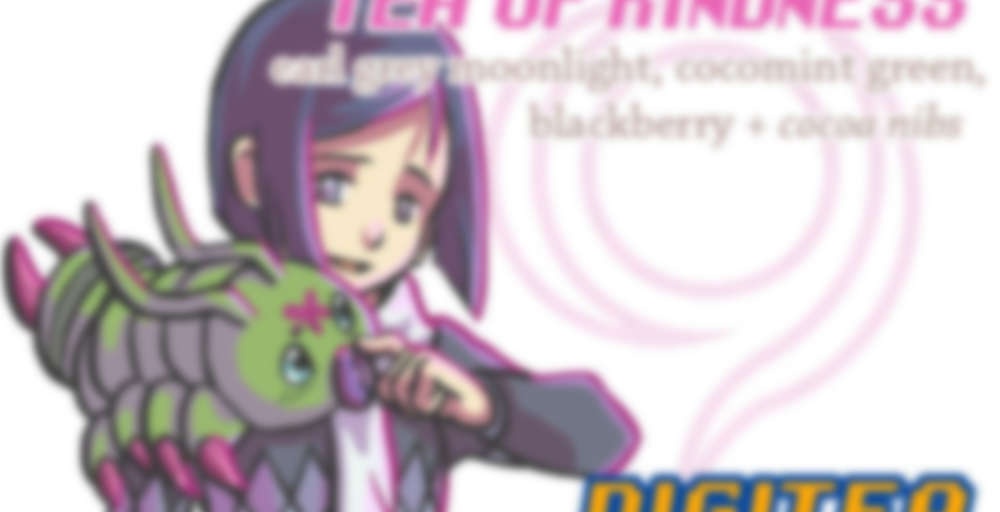 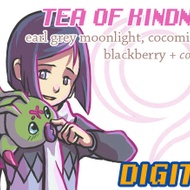 by Adagio Teas Custom Blends
--
You

Digimon Kaiser turned DigiDestined, Ken Ichijouji is the bearer of the Crest of Kindness. Ken and Wormmon present the Tea of Kindness, a blend that contains earl grey moonlight, cocomint green, and blackberry, with cocoa nib accents. (blend and label art by [email protected])

One of a kind

The Tea of Kings

T is for… Tea of Kindess!

I’ve been waiting for a good excuse to steep this tea up – it’s inspired by Ken, from the second Digimon series. He’s probably one of my favourite characters from any Digimon series, and if you were to treat the digi crests the same way that people do Hogwarts Houses then I would probably most identify with his crest – the Crest of Kindness.

I’ll save talking about whether or not that I think this blend is a good representation of his character for another time though – right now I just want to focus on the flavour of the blend. There is a lot going on, and when I was reading through the ingredients of the different blends it’s made up from I fully expected it to be a chaotic clusterfuck of either muddled or competing flavours.

So, I was pleasantly surprised to really enjoy the taste of this tea! Despite all the many things happening, the one flavour that really jumps to the top of the pile and makes itself known is the blackberry. It’s bright, it’s sweet, and it’s distinctly blackberry. I recognize it from some of the other blends I have from Adagio that are blackberry flavoured, and I’m realizing now that it’s probably one of my favourite flavourins they use.

Aside from that, I actually also tasted the cocoa a lot more than I had expected to, creating what was overall a really nice light but jammy and sweet medley of blackberry and chocolate flavours. I’ll be interested to see if that flavour can be recreated consistently, but I just thought this was delightful!