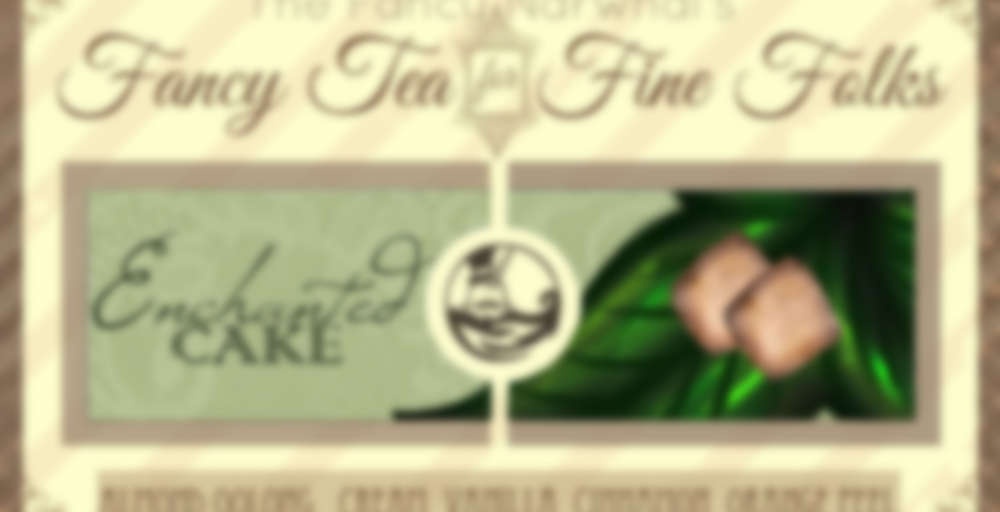 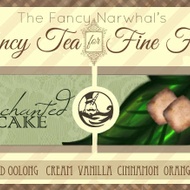 Think the most delicious nutty, sweet cake or short bread with cinnamon and essence of orange. This tea is soft but after a cup you’ll find it was enough to fill the cravings of a grown man.

Original Blend removed from Adagio due to ‘copyright violation’ at the request of the saul zaentz company.

Tea was rereleased by the creator under a different name. Now called Fancy Tea: Enchanted Cake and can be found under the ‘Fancy Teas for Fine Folks’ Fandom/Signature Blends heading.

This text removed from updated tea.
One cup is enough to fill the stomach of a grown man! But you can’t just have one cup of this soft, sweet tea, and you should probably brew more than one just because it’s delicious.

After re-reading my first note, I feel like this one didn’t agree well. It tasted like a spicy chai with lots of cinnamon this time around. Not bad, but nowhere near as good as the cinnamon coffee cake I originally described.

i first sampled this tea back in mid February, but never got around to writing about it.
then i had it again sunday night. it was a celebration tea! my roommates told us that they are pregnant again!
i say roommates but they are a married couple and Oddree calls them the Little Family cuz it is mom, dad, and their little girl who is less than 2yrs old. and come winter she will have a baby sibling. Overall it’s 5 adults and a baby in a big house and it’s pleasant living :) they are seriously great people and i am really happy for them.
i’m also really excited to keep playing with babies cuz they are totally fun.

this tea has many names due to bummer copyright violation bunk.
the world is changing so fast and the corporate influence is trying so hard. but didn’t anyone bother to tell them that this is tea? it’s just tea dudes. tea.
also, corporate hegemony helps their grand plan duh.
(i know this isn’t really the same as an attempt at corporate control, but it feels like the trickle down)
they wanna keep grips on the money/power but ultimately fandom will rule everything and it won’t be stopped. cuz homegirls are some passionate people. (i just hope homegirls also keep up on current affairs so they have enough time to sell their replica models and limited edition collectibles before the food shortage arrives.)

UGH omg shutup shmiracles! (this is what happens when you stay up too late organizing digital comics and then oversleep and have to rush so you take your adhd meds without eating food haha)

every time i have an adagio tea that is on the lighter side of taste and also has cinnamon in it i love it. they also all kinda end up tasting the sameish.
not a complaint! not a complaint!
it’s just that i think the cinnamon tends to overtake many of the subtler flavors that would be in a blend. so the vanilla and almond are there yes. but pretty mellow. which is fine with me :) i really do like the relaxed cinnamon teas. that’s what it is. relaxed cinnamon with bakey notes.
i used to avoid cinnamon teas. they were always too strong. yet the adagio blends do it right.

thanks to moraiwe for doing this fandom sampler swap with me. i’m still enjoying the fruits of our labor.