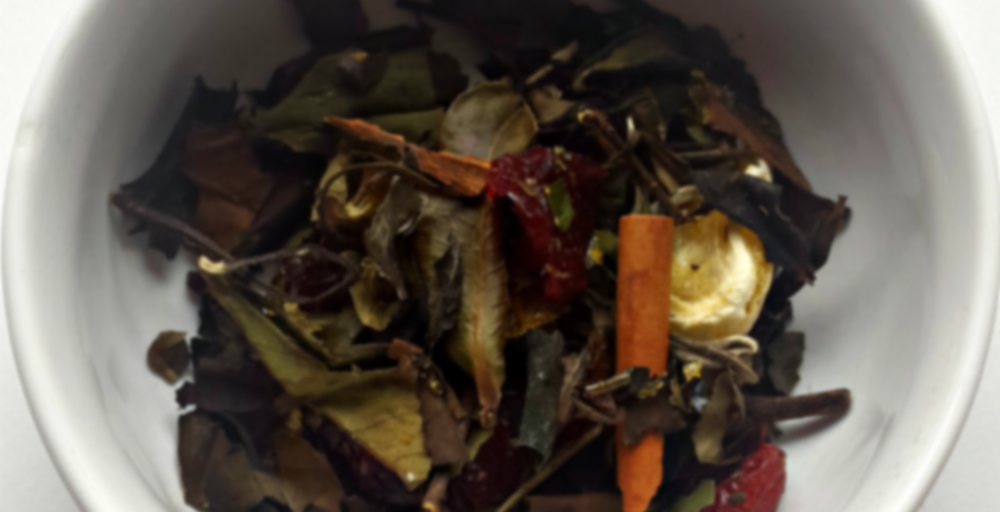 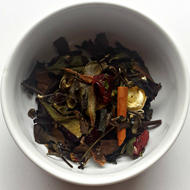 Vibrant, sweet orange pairs with gentle honeysuckle notes of a white peony tea that makes a cup that’s reminiscent of candy and baked goods. Subtle notes of clove and cinnamon keep the cup from becoming cloying, and a bright cranberry finish has you wanting more!

This was my free sample from my order! A lovely and unique blend of cranberry, tangerine/orange, cinnamon and cloves with a white base. I can definitely taste equal parts cranberry and tangerine/orange. It’s refreshing from the fruit but also like a holiday blend with the cinnamon notes. I’d say the fruit notes aren’t too strong, but much stronger than the cinnamon. The cinnamon is much more noticeable during the second (much hotter) steep and there is still plenty of the tangy yet sweet cranberry and tangerine. But Lauren does really well with flavor proportions! I think the white tea lends a creamy citrus flavor as well. Delicious! http://www.etsy.com/shop/AQuarterToTea
Steep #1 // 2 teaspoons for a full mug// 25 minutes after boiling // 2 minute steep
Steep #2 // 15 minutes after boiling // 3 minute steep

Yay, more teas from A Quarter to Tea!!!

So, I picked up the seven tea sampler but only six teas really stood out to me so for the seventh I just asked Lauren to surprise me. This is the surprise tea! I have to say, I’m not totally sure why it didn’t catch my eye given that I’m a fan of everything in it. Especially the cranberry and cloves!!! It’s a stinky, stanky tea though – not in a bad way but in a “you’d probably need to triple bag it to keep the intense aroma in” sort of way. My entire package smelled super strongly of this bad boy, so I thought I’d best finish it off quickly so as to not let the aroma contaminate the other teas.

Of course I cold brewed it: it was really lovely! The cranberry could have maybe been just a touch stronger, but I’m also totally a cranberry fiend when it comes to my teas so for someone who only likes cranberry and doesn’t love it I imagine the proportions were probably reasonable. I felt like I could taste a bit of everything though; and that’s exactly what you want out of a tea: proportional representation of all ingredients! It was lively and fruity (the tangerine was a super nice touch), but with a perfectly balanced spice backdrop that made it seasonally appropriate for the Autumn/Winter transition. This is exactly what I wanted, but didn’t get, out of DAVIDsTEA’s Cranberry Orange Muffin tisane. So good!

And God Bless Lauren for not including ginger.

Ooh I have this, need to try it.