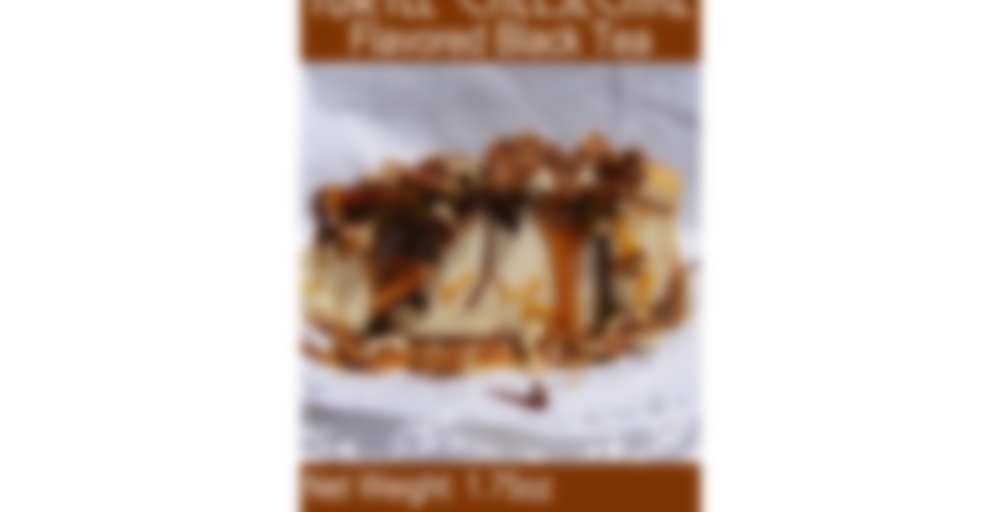 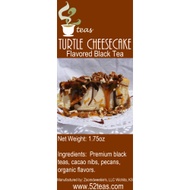 Our newest Tea of the Week is a Turtle Cheesecake flavored black tea. We combined premium black teas, organic roasted cacao nibs, pecans and organic flavors to create a cup of awesome. This tea is vegan-friendly! Our Cheesecake teas never last long, so get yours today. See all of our current inventory of teas (including some reblends this week) at http://www.zoomdweebies.com/Available-NOW_c_32.html

Realized this had been sitting for a bit, and it’s almost gone anyway because I shared so much in swaps, so perhaps I’ll get to sipping it down this week.

Brewed at a really low temperature because I was also brewing a green at the same time, and it seems to have change little. It smells right, I definitely get caramel and a hint of chocolate in here, however I’m still missing cheesecake. Boo.

It’s… just okay. I had hoped for more out of it. Or maybe I’m just demanding! :)

I found myself saying that about a lot of 52teas blends, really…

Agreed. I find many of the 52teas blends lacking, this one included. I didn’t log it yet, because I thought it was by an error on my part.

I was trying to get an unflavored tea reviewed, but ran out of time due to mass amounts of vacuuming that had to be done. Ugg, I hate vacuuming!

Turtle Cheesecake? Yum! Steeped up plain, I enjoyed the black tea base with end sips that tasted like chocolate, buttery caramel and nuts. Sadly, no cheesecake.
Once I added some german rock sugar, the cheesecake flavoring came out, but less nutty flavor. Overall, I wish the cheesecakeyness was stronger, but overall a nice dessert tea.

Thank you Dexter3657 for giving me the opportunity to try this tea. This has been calling to me since I joined steepster. However, since I joined steepster and started exploring all sorts of tea, I think I learned that more times than not, 52 teas black blends will fall short of expectations. There are some exceptions to that rule but alas, this is not one of them.

Perhaps I am too hung up on the name but there is certainly no cheesecake in this tea. There is a thick black base with a sweetness that could be called caramel and a slight nuttiness that could be the pecan. I am not getting much chocolate though. Perhaps I need to play around with the steeping but this cup was not the turtle cheesecake deliciousness I was hoping for at all.

I always hope for it all too. I gave up trying to search for specific notes with certain companies after a while.

I think the name is important. It sets an expectation in a way. That’s often why I’m so over the moon when the name is perfect for the tea.

Yeah. I find that even if a tea tastes good, if doesn’t live up to the name and the expectations that comes with that, I am not happy.

I agree with everything you are saying. It’s hard to find all the promised flavors in these blends. It’s still not all that’s promised, but I like this even lower water closer to 90C for 2.5 minutes… not promising anything, but maybe you might get a little more out of it. :))

Thanks Dexter! I shall try that out next time. You sent so much that I definitely have enough there to play around with it and hopefully find the sweet spot.

Had last night for dessert – I pretty much only got chocolate, which is sad, especially considering I was wanting caramel, nuts and cheesecake.

I think I’ve decided that as a whole chocolate in tea is just not for me. Now, vanilla? I can do that ALL day long. But chocolate just never comes across as anything but fake and chemically. Boo. But, lesson learned. I need to just do some spring cleaning in my cupboard and send this along to someone who will enjoy it more.

I was excited about this blend from 52Teas. Chocolate and caramel and pecan? drool!

Served hot, the flavors are a little muddled, so give it a few minutes to cool off a little bit (still hot but not fresh from the teapot hot) and this allows the flavors to pop. The black tea is a good base, a pleasant, rich tea. The malty tones in the tea accentuate the caramel in a very palate pleasing way.

I wish there was more chocolate. (big surprise, right?) As the tea becomes “warm” as opposed to what I’d call hot, the cheesecake flavors come out. I can taste the toasted pecan notes, caramel, cheesecake and chocolate at this point.

There is no such thing as enough chocolate.

I’m a little torn with this one. I’m not getting much pecan and nothing that I would call cheesecake. I did lower water temp and went with the suggested 2.5 minute steep time.
My problem is that I really like 52teas chocolate. This is deep dark chocolate rather than the milk chocolate of most chocolate teas. I really like it as a chocolate black tea, but I’m not sure it lives up to the name.

Thank you MissB for sending me a sample of this one. :))

From the Great Canadian TTB.

This one is very similar to most of Frank’s cheesecake blends. I am getting a dark chocolate taste as well as burnt caramel. There is a very, very clight cheesecake flavour, but the tea is thick, dense and creamy, like what a bite of good cheesecake feels like in your mouth.

I am not necessarily getting turtles, but I am getting the chocolate and caramel. I am not getting much in the way of nuttiness. I think this blend could very easily be morphed into a chocolate salted caramel tea.

I added about 3 pieces of rock sugar.

Honestly, my reviews this month are going to be probably a little shorter than usual. I’m going to be drinking a lot of tea, but NaNoWriMo has writing priority. I’d like to finally break my chain of failure in that regard.

The caramel was the dominating flavors, and the cocoa the next prominent. There was a dry nuttiness offered by the pecans throughout, as well. The base was slightly overwhelmed by the amount of other flavors present, but that may have been the result of the milk turning it down more than anything else. I don’t think I would be huge on the black base chosen here without the additives. Otherwise, it was a really tasty dessert latte, but I wish the cheesecake element presented itself a bit stronger.

The dry leaf aroma is heavy on the chocolate, almost like chocolate liqueur. The brewed tea aroma is recognizably Frank’s black tea base. It smells a lot like Pancake Breakfast, which is by far my most drunk blend from 52teas. It also smells faintly of something sweet. Almost a fruity kind of sweetness, like raisins. Weird.

First sip…hmm, this is odd. It tastes like Pancake Breakfast too. I think this needs some sweetener to awaken the flavors. I added a splash of skim milk and a good bit of Truvia. What is this supposed to taste like? There’s maybe, maybe a chocolate-esque flavor going on here, but it is very light and almost dusty tasting. Like chocolate that’s sat in the cupboard for too long and has lost its punch. Where has the chocolaty goodness gone? :(

If I imagine the sweetness I added is supposed to be caramel, I can kind of make it taste like that. But really, I’m just getting a generic, light black tea. Booo! This sucks. I wonder if I let my pouch sit for too long before trying it…This has been out for a while. I apparently bought it at the beginning of September! Holy cow!

So maybe this is no fault of Frank’s. Still, I am rather disappointed. I thought for sure that chocolate, caramel, and cheesecake would make for an AWESOME tea combination. I know this tea could be stellar. Frank’s Caramel Pumpkin Cheesecake is to die for! Alas, this is just nowhere near that. Here’s hoping this isn’t a trend because I just made a sizeable purchase from 52teas, including three chocolate teas and one caramel tea.

All in all, I bought 8 new teas. O_O Yeeeaaahh, that’s totally not helping my overflowing cupboard problem. Well, one is a gift for a friend and three are only iced teas. So those will should go quickly. Wow, that was a long digression. ANYWAY. I will write another note if my opinion changes on this one. For now, it’s just so-so and is rated accordingly.

A tea’s flavor shouldn’t change that much in short a time. I’ve definitely had this issue with 52 teas in the past, it’s just a sign of poor quality :(

I had some of the Caramel Pumpkin Cheesecake after this cup, and it was noticeably less delicious than I remember. So, I’m pretty sure this would have tasted better when it was fresher. I agree with what you said too though. 52teas’ blends don’t last as long as some of the other teas in my cupboard.

Another one from Dexter3657! thanks so much again! I REALLY wanted to try this one, so I was very happy to see it in the box! Is it wrong that I had this one with an actual piece of nutty chocolatey cheesecake? Though I think it had walnuts and this tea has big pieces of pecans.. I made sure to get a piece of pecan in my infuser! I don’t think this is distinctly “turtle cheesecake” but there are subtle hints of all of these elements, and they sure are tasty. I wish 52Teas assam base was used here, but it may have overpowered the flavors. There was more of a silky texture from the cheesecake, tiny hint of chocolate & pecans and a sweetness from a caramel flavor. This was steeped at boiling for 2-3 minutes but I have to experiment with the best steeping method.. luckily I have a few teaspoons to work with! :D I think my favorite 52 cheesecake has been the Earl Grey Cheesecake… This is very tasty anyway!!