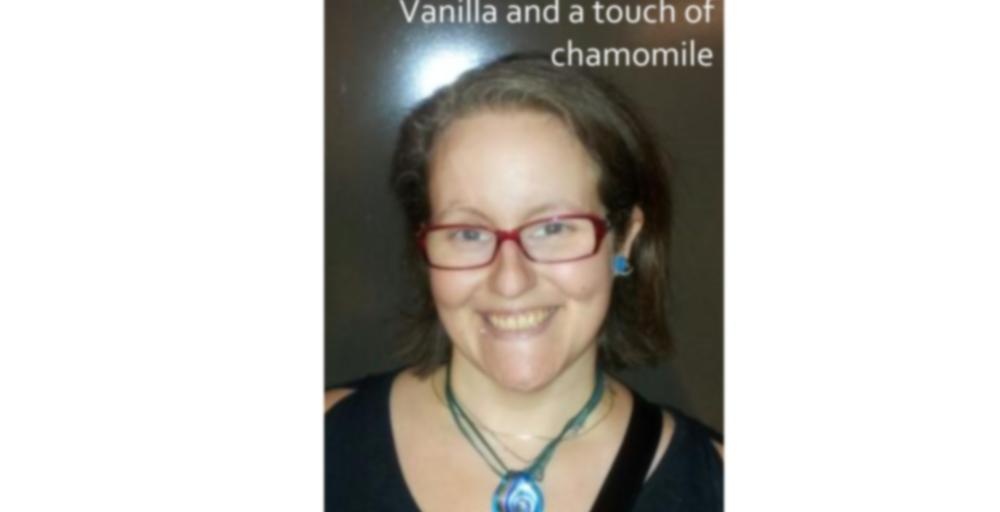 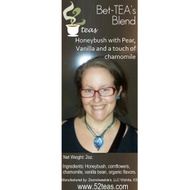 Well folks, I have been busier than a one-legged man in a butt-kicking contest lately, working on piecing together all the various bits of our upcoming crowd-funding campaign to bring back Zoomdweebie’s Tea Bar. I confess, I am a little behind on orders, but will be caught up soon.

My friend Betty here was kind enough to help me out with creating this week’s tea of the week, because I think my brain went on strike.

Well, she said she wanted something fruity, something light and refreshing and something calming. Bit of a tall order, but I think y’all will agree that we hammered out the perfect answer.

BetTEA’s Blend is a honeybush base with mostly organic pear flavors, with just a hint of vanilla, an even smaller hint of chamomile and some blue cornflowers to make it pretty. I have a feeling this one is going to go fast.

Get yours today at Zoomdweebies.com!
Just $8.99 including shipping to the US!

I wasn’t all that excited about this blend … but I ended up liking it a lot more than I expected to. I’m not a big fan of chamomile, but I do like it with honeybush. This is sweet, lightly fruity, and pleasant to sip.

Not my favorite from 52Teas but it’s nice.

Boiling 5 min, 0 sec
Yours I Like This
6 likes
0 comments
Edit

My order from 52 teas came on Friday after 3 weeks of waiting, but I had a bad cold so I couldn’t smell or taste anything! I am finally feeling better today and have my sense of taste back so I couldn’t wait to try out some of the teas. This one is first because it’s 9:00 at night and the rest of my order is caffeinated.
There are no brewing instructions on the bag which is fine because I never follow them anyway, so I threw 2 teaspoons of this stuff in my steeper with 12 oz of water, what can I say, I like my tea strong.
I’ve never had a honeybush base tea before so I wasn’t sure what to expect. I ordered this because I’m on a mission to find the perfect pear tea and I can always use decaf teas as I have a strict no caffeine after 5pm policy. I also liked the sound of the pear blended with vanilla.
I must have over leafed because the tea turned dark brown instantly when I added the water, so I only let it steep 3 or 4 mins. The first few sips while the tea was still hot were pretty uneventful. I didn’t taste much besides the honeybush. As it cools I’m getting more flavour, but I can’t say it’s a pear flavour, just a fruity flavour with a honeybush aftertaste. I know Frank only uses organic natural flavours but the flavour isn’t all that natural tasting. I am going to play around with the amounts and times a bit to see if that makes a difference.
This isn’t a bad tea, it’s actually quite pleasant, but not something I would purchase again if it was re-blended. I might even include this in a swap down the road if it doesn’t get better for me.

For myself, I have the best luck with Frank’s teas when brewing 2 min 30 sec at less than boiling.

Forced my mam to have a cup of this with me. She’s thrown out all of my single-mug steepers so for the time being she is sharing my two-cup teapots with me as punishment! Heh. She didn’t mind the cup of Adagio’s cream flavoured tea earlier, but this one she is not a fan of. Pulled a face and I wouldn’t be surprised if it went down the sink as soon as I left the room! It’s not my favourite, either. I received it in a mystery order a while back, and it’s not one I would have ever chosen on my own. Pear isn’t a flavour I think about actively choosing very often, and honeybush, chamomile and vanilla are all ingredients I tend to actively avoid! Despite the intial trepidation it’s not that bad. I chose it because I’ve had a rotten day and wanted something soothing, and it is doing the trick as far as that goes. The description for this tea says that the vanilla and chamomile are subtle, and I have to agree, but while it also says it is strongly pear-flavoured I would say that the honeybush is the overwhelming note, with the pear dancing around in the background and lingering more as an aftertaste. This is from Frank’s 52teas, though, not Anne’s, and the faded pear could be down to the tea’s age (though I don’t remember ever finding it particularly strong, and browsing other notes it seems like it never has been). Not a ‘wow’ moment, but it is soothing, and that’s what I’m looking for right now.

Sorry, was this tea supposed to taste like anything? Because really all I’m getting is honeybush and that’s literally it. I had to actually look up the ingredients list because I had no clue what this was supposed to taste like. There’s maybe a bit of extra sweetness (from the pear or vanilla…?) but honestly it could easily be taken for the natural sweetness of the honeybush.

A nice, subtle honeybush blend. I was expecting a little more pear flavor, but there is a subtle fruitiness. A nice after dinner or bedtime tea.

So I have no clue what is in this but when you get a chance to try a 52 tea blend, you take it and thanks to AshleyElizabeth, I was able to try one more. This is actually a nice cup. Honeybush is probably most prominent but there is a hint of fruitiness that I am quite enjoying. Also, apparently this has chamomile, but I am getting none of that flavorwise which makes me happy as I am not a fan. All in all, not a bad cup :)

soooo glad i didn’t buy this. sorry Frank, but you’re off my island for the time being. This was one that intrigued me but due to the fact that most reblends have eben lacking lately, combined with the overall feeling like the focus from frank is NOT on tea blending, I passed…oh and canadian shipping is the suck. When i saw this in the box iw as a little excited…excitement which soon faded on first sips. this is just… ick. honeybush, chamomile, blechy weirdness. no. thanks but no.

However, thanks to ash for sharing this so i could cross it of my list! :)

Edit: Final Count for February 145 (+ a bunch more that I don’t have the time to go through an add tonight…soo tired…final count tomorrow maybe. maybe…so i can get the march starting number.)

A very soothing blend. Perfect for before bedtime.