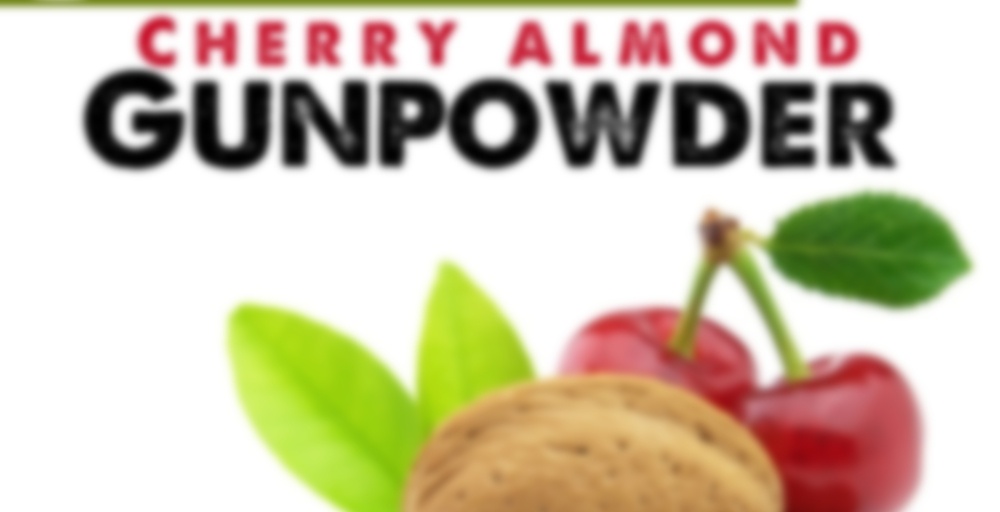 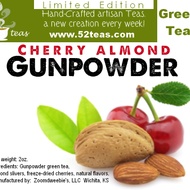 My wife has been asking me for this blend for months. Sometimes I ask her what I should blend next. She likes to throw out ideas, and most of the time, I say, “Nah,” which irritates her to no end. “Why do you ask my opinion if you never listen to it?” Well, wifey of mine, I do listen. I don’t always act immediately, but I do consider everything you say.

So, here, for my lovely wifey, is a gunpowder green tea blended with almond slivers and freeze-dried cherries. I love you, Sheri.

Oh, I guess I’m the first person to log this blend – huzzah! Thanks for the fast shipping Frank. :D

I was a little leery of this because cherry flavored things so often taste like cough medicine to me, but I do like gunpowder teas quite a lot.

I steeped this for around 3 minutes at 180F. The almond here goes great with the vegetal and slightly assertive nature of the gunpowder tea. The cherry is mild and reminds me more of sour cherries than sweet ones. No cough syrup here thankfully!

I’m not sure this blend is for everyone, you would have to like gunpowder tea quite a lot since it overpowers the other flavors just a little bit. Not my absolute favorite from 52 Teas, but still very creative and tasty. How about a banana almond gunpowder?? :)

This is a flavor combination that in my opinion and from experience tasting from other companies can be done quite wrong! Frank has done this blend QUITE RIGHT!
The cherry and almond come through nicely and the gunpowder base is not overwhelmed by the cherry or almond that are more than present!
It has a thin mouthfeel and would be amazing cold brewed! Light and refreshing not cloying whatsoever. I am sure some sweetener added would make a wonderful iced tea for kids or those of us who have sweet teeth as well :)
Thanks for another masterful creation Frank!
ETA: (A term stolen from Kittenna) this one re-steeped very well! Still as strong in flavor WOOT!

Only problem with 52 Teas blends is that they can sell out so fast.

Azz – For sure! I’m hoping i can sneak an order in this week when my other half isn’t looking grin

I love the combination of cherry and almond, I even had a stellar cherry almond black tea blend that I offered back when I was a tea artist, but, I don’t find cherry almond flavored green tea quite as often as I find the black. And I don’t understand why not – these flavors work wonderfully with the gunpowder green!

Sweet, nutty, and I love the delicate touch of cherry. It isn’t so strong that it tastes of cough syrup. It’s just really yummy! Love it!

Mmmmm this one sounds tasty. Need to find me a really good cherry tea that isn’t cough syrupy or artifical

2nd Infusion: The cherry flavor has emerged here, not overly syrupy or anything, but a stronger tart flavor has come forth to contrast with the sweet nutty notes. I am enjoying this second infusion as much as I enjoyed the first infusion! It’s really good.

This was a pleasant surprise! I didn’t get this when it came out since I was certain there was no way I’d like this being almond flavored. Amy oh sent some to me in our last swap and today I decided I’d give it a shot.

It was actually really good! I don’t like those fake super sweet almond flavors and this actually tastes more like almonds than a flavoring. The cherry isn’t bad either, not medicinal at all. Definitely a really cool mix to go with a gunpowder green. All the flavors meld together beautifully, and it makes for a pretty tasty cup.

I’ve been drinking this one for a while and never logged it, although I thought I did. Anyways. This one was so good that I had to re-buy it, but I can’t really say what compelled me to buy it in the first place. Cherry flavored anything makes me leery because it’s not usually done right. But since it is a gunpowder base, which is a stronger green tea, I figured it would hold up to whatever was being added to it. But it was a green tea. So, I more or less bought it on a whim.

I wasn’t disappointed. The first I tried it I got too many cherries in my scoop and the first two brewings tasted a little too tart, these aren’t sweet cherries. But after the second steeping the cup rounded out very nicely. The cherry is very present but not in a bad way, it doesn’t taste fake or cough syrupy at all. The almond lends a nice smooth nuttiness to the cup helping to balance out the tartness of the cherry. The gunpowder base held up nicely and was still present through the additions.

After having buggered up the first time I tried again a few days later with a better balanced scoop and all I can say is it was yummy. The flavors blend wonderfully, no flavor overpowers the tea.

The other thing I really love about this tea is that it brews several times, I would say upward of ten times. It’s amazing, and it holds up great in a travel mug!

Have you ever opened a bag of tea and it smelled so good you wanted to eat the dry leaves then and there? That’s what this tea smells like to me – it reminds me of the awesome almond cherry biscotti my dad makes.

The tea brewed up quite dark for a green tea, like many gunpowder greens. That base was a pretty good choice because it gave the tea more of a robust slightly smokey base rather than a light vegetal one liked you’d get with a sencha. The almond and cherry (two things that I absolutely love BTW) blend very well with it and the end results weren’t artificial-tasting at all. Two thumbs up, Frank.

This was an odd pick for me in that it is a green. Gunpowder greens are normally okay for me but I was thinking more of a friend who adores Lemony Gunpowder from H&S. But I had to try it before I gave it to her. :)

I like this. Smells wonderful. Steeps light golden. I don’t taste a lot of almond but that’s okay. I do taste a decent amount of good, not sweet or fakey cherry and the gunpowder base is good.

I’m usually good at resisting 52teas’ quirky new flavors, but I had to buy this one the moment I found out about it — cherry and almond are some of my favorite flavors, and gunpowder is one of my favorite teas.

It’s a really lovely tea, full of almond slivers and entire dried cherries (although I’ve been pulling those apart so that I can get a bit of cherry in every cup — I wish they’d have come cut up!). The scent is also fantastic, a blend of each of the flavors that reminds me of almond extract to the point of being kind of overwhelming. I don’t mind, but people who aren’t fans of the way almonds smell will probably not want to indulge in the scent of this.

In taste, the almond isn’t overwhelming at all. The flavors really blend together well, and unless you understeep it, the gunpowder is the primary taste. It’s a lovely base, green and smoky and something that I’d happily drink on its own. Too bad this is a flavored tea — and the added flavoring is very subtle! I still enjoy it quite a bit, but I expected something a little bit stronger in flavor from a company like 52teas.

Man this is my last cup of this too. I’m finishing off a lot of 52’s this week. It’s sad but my stash is looking more roomy for new teas :-)