Note: This rating isn’t for the staff, who were lovely. It’s because I feel the teas do not deserve those kinds of prices. Just ridiculous.

Anyways, the store has a lovely set up. All the fancy (expensive) accessories are just amazing. Way out of my price range, though.

As far as the teas, they are selling TWG. Most of the flavoured stuff is extremely highly flavoured, like incense and perfume. Some was nose-burningly strong, some smelled delicious, and some I wanted to scent my room with. I got one of the cheapest teas at $9/50g. I would like to try more, as some of their flavour combos are really interesting, but the prices are such that I would much prefer to get 10-25g to try, and then if I truly love it, I could splash out for special occasions.

Another problem is that they don’t list ingredients, just flavour notes. Not so useful when people I hang out with regularly have horrible allergies and sensitivities to a multitude of foods. 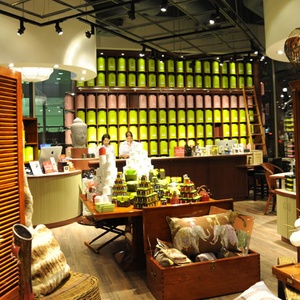 First let me start off telling everyone to try the Lavender French Earl Grey tea!! This tea is beautifully aromatic and the hints of lavender work well with the bergamot and has a nice floral finish. Pair this with the 1837 black tea macaron or even better, the grand wedding macaron.
With that being said, expect to spend a fortune. I got a few 50g bags of different teas and spent around $50. A tea to go is around $4 which is also the same price for a single macaron (the prices make Urban Tea Merchant a rare treat for a poor student like me lol). But the teas and tea accessories are quality.
I usually get my tea and macaron to go and have only sat down for tea and a macaron once. Everything was presented nicely but for the price I’m paying I expect not to be served in porcelain tea cups or mugs.

Beautiful presented shop, and lovely staff. For the prices they are asking the tea should be amazing, but it is just ok (i sampled/smelt a few oolongs and a couple of black teas). I guess the rent costs alot as its an expensive area. Good for pretty packaged gifts.

The gentleman who helped us was very kind and helpful.
Although the prices scared me a little, my friend and I eventually sat down and had a pot of ceylon tea in their outer sitting area.

The teas smelled very, very nice. And I would love to go back for a pot every once in a while when I’m feeling rich.

Note: This rating isn’t for the staff, who were lovely. It’s because I feel the teas do not deserve those kinds of prices. Just ridiculous.

Anyways, the store has a lovely set up. All the fancy (expensive) accessories are just amazing. Way out of my price range, though.

As far as the teas, they are selling TWG. Most of the flavoured stuff is extremely highly flavoured, like incense and perfume. Some was nose-burningly strong, some smelled delicious, and some I wanted to scent my room with. I got one of the cheapest teas at $9/50g. I would like to try more, as some of their flavour combos are really interesting, but the prices are such that I would much prefer to get 10-25g to try, and then if I truly love it, I could splash out for special occasions.

Another problem is that they don’t list ingredients, just flavour notes. Not so useful when people I hang out with regularly have horrible allergies and sensitivities to a multitude of foods.

I’ve been here about a handful of times in the past 2 years and each time I brought friends who have never been and they’ve all enjoyed it. It’s one of my favorite places for afternoon tea. The staff is friendly, the atmosphere is very clean and they cater to vegetarians (me!).

EDIT: Sept 5, 2012.
I was surprised by the folks at Urban Tea when they sent me a lovely hand written post card for my birthday this past June. They were also sweet enough to offer me a sample of their Birthday Tea to take home as well! I am a forever customer :)

I absolutely LOVE TUTM. My friend and I have been going here twice a month for the last two years.

I was sad to see them leave behind the The O Dor lineup to pick up TWG, but I still enjoy the tea nonetheless.

The atmosphere is great, the pots of tea are fairly priced considering their quality. The food is on the expensive side, but a $3.50 scone is really all you’d need to compliment your tea anyways!

Very classy without being suffocating, I highly recommend this place to anyone who needs a business lunch, a fun tea tasting experience or a low-key first date.

Great tea selection at reasonable prices in bulk (just don’t look at the cost of anything else in the store). It’s cookies and teas made in store are worth a try but are more expensive then starbucks.

Ah, the Urban Tea Merchant, where my high quality tea education began. It seems as though over the years they’ve changed their focus a couple of times – when we first started going there, the focus seemed to be mostly unflavored high quality teas and tea blends. I remember having a a couple of first flush darjeelings that were absolutely delicious as well as a couple of blends that were recommended and lovely as well.

Then they seemed to change their focus to more flavored teas, much to my dismay (though I do love flavored teas as well). The main “house” brand was THE O DOR, which while very high quality, is very focused on more flavored teas. Now it seems as though they’ll be focusing on TWG teas as their main brand and it looks like they’re going back to a focus of both flavored and unflavored teas.

The quality of the teas that they carry is always very high and the Afternoon Tea Service (we’ve had both the regular and a special Valentine’s Day menu) was delicious. The service has always been very helpful and knowledgeable, but they do tend to hover a bit, which I find slightly annoying. As far as pricing goes, it’s a very expensive place – High Tea will set you back quite a bit, but for a special occasion it’s almost worth it as the food, service and ambiance make it a wonderful treat. I find their loose leaf teas are market-priced (especially if you buy without the TWG tin) and their macarons are very delicious, but almost $4 a piece. Their to-go tea menu is reasonable and encompasses a variety of what they carry loose. Overall, we visit here quite a bit and do enjoy coming here, though we often leave with much lighter wallets.

Nice shop—fantastic place for gift shopping! Staff is professional, knowledgeable and friendly and very service-oriented. I don’t know much about tea, but this store got me hooked! Yes, it’s a bit on the pricey side, but the quality is there. I found the tea room a bit cramped and noisy, so I don’t stop in anymore. Might be a bit more comfortable and relaxing in the summer if there is seating in the courtyard.

The store itself looked to be quite beautiful (but EXPENSIVE!). The room we were given seats to was intimidatingly beautifully set. If I wasn’t with two friends of mine, I’d have felt I was out for a Sunday brunch with my 80 yr old grandmother- a tranquil, serene space… like her living room.

The service to our table was brilliant. That was probably the best serving I’ve experienced at any restaurant or drinking establishment. I’m unfamiliar with normal practice in tearooms, but we were given the opportunity to smell each and every tea that we considered buying a pot of— pretty damn nice.

All-in-all, we stayed there together comfortably and enjoyably for almost 2 hours and our bill was affordable (we just stayed clear of the 40 dollar cups and Thomas Haas pastries!)

I’m not very good at rating places. I think I’ll probably just end up giving them all the same rating, because I’ll be afraid Five Stars is “Too Perfect”, but that the place is still pretty awesome, and deserves a four at least. Edit: Bumped up to five after my second visit.

I went to Murchie’s today, and then made my way here—a little nervously, I might add. But I stepped inside and within no time was greeted by an impossibly friendly older woman who gave me a tour of the whole place (and poured me a sample black tea, which was quite nice). She wasn’t intimidating (surprisingly!), and left me alone to browse—she returned once to give her opinion on some teas, and showed me how to open sample tins to take a sniff.

The retail area is fairly small, but I have a thing for wandering in tight circles for hours on end when browsing (I’m very indecisive). Off to one side they have a setup where a tea representative reviews and answers questions about tea (apparently I’d missed him/her, because there was no one there). I ended up ordering Place Saint Marc to go, which was pleasant. I didn’t end up buying anything else (Jillian was right, stuff’s EXPENSIVE)—I think I’ll have to try a few teas and pick a favourite before I commit to a thirty dollar tin.

I actually came home and resteeped the teabag of Place Saint Marc. Mm.

Edit: I wish you could write more than one review, like with teas. Gah. Anyways, made my way here after hitting up Value Vintage and Chapters. I got Madame to go, a delicious smoky berry tea, and bonded with the employee who did the transaction, because he is apparently a fan of smoky teas as well. Awesome.

His shift finished soon after that, so I hung around the place, browsed, and spoke to the other employees. I was also the only direct witness when a scruffy man came in and very obviously shoplifted a fancy lighter. And then I did something stupid!

I confronted him and politely asked him to put the lighter back. He waved me off, so I asked him again, “what lighter?” “the blue one you took from that shelf”. It didn’t really work out very well, and I couldn’t understand what he was saying, really—he pulled out a different lighter at one point, silver, and said something like “my lighter is right here”. Waved it at me, but by now the employees were looking. He rushed out of the store after that, and I didn’t stop him. He was scruffy and thin, but still bigger than me (which isn’t hard, I am a small man). All I’ve got going for me is a sharp left hook, not a strong one.

The employees came over after that and I explained what had happened. The lady made a few calls, but we concluded there wasn’t much that could be done.

In retrospect, it was kind of a stupid split-second decision, especially since I think it was a combination lighter and wickcutter. And after I bought tea and left, I was fairly on-edge and paranoid until I got home.

. Murchie's Tea and Coffee - West Hastings
no ratings yet
0 ratings