I’ve only been to this place once, but I’m really glad I found it, and hope to visit again. Great in terms of quality and fairly reasonable prices from what I could tell. Awesome atmosphere – it’s cozy and relaxed, and wasn’t at all noisy when I visited. Friendly staff willing to answer questions. Although I don’t know a lot about different tea varieties, I do prefer loose leaf teas, and was almost overwhelmed by all the different kinds they offer. Definitely recommend to any tea lovers out there! 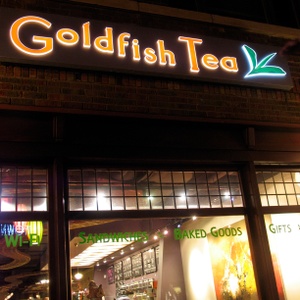 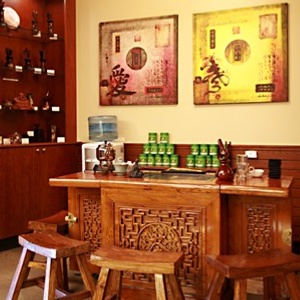 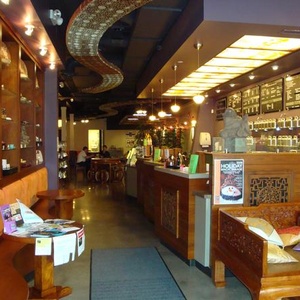 This place was ok…I go here because there is no other tea house options in the area. They have a large selection of tea to choose from however their service is terrible and I thought the layout of the store was difficult to navigate.

Goldfish Tea in Royal Oak Charter Township, Michigan
5/5
Edit
Reed Rabbit rated this place
5/5
and said Edit
I really enjoy Goldfish. If it were closer to my house I’d definitely make it a regular spot. Prices are good and the tea is great. The clerks are generally very knowledgeable and helpful, and are excellent at making recommendations from their large selection of teas, and the owner (at least the man I think was the owner!) was very nice. I actually have a not-so-secret love of their custom made tables and chairs which have a very rustic look to them. My friend and I refer to them as troll furniture and they wouldn’t be out of place in The Hobbit. ANYWAY – I emailed the owner about the furniture and he was nothing but kind and helpful in answering my random questions, and even offered to help me acquire some of my own (I believe it was hand crafted in China).

I just learned (last night when I stopped in) that they have live music in the shop sometimes. Not really my thing, as I like to go and chill in the quiet, or be able to chat with friends, but I imagine this is a draw for some folks.

Has anyone tried their bubble tea yet?

This place is wonderful and they know their tea. They have a great selection of tea ware and teas and whenever I’m in Michigan I go there.

I’ve only been to this place once, but I’m really glad I found it, and hope to visit again. Great in terms of quality and fairly reasonable prices from what I could tell. Awesome atmosphere – it’s cozy and relaxed, and wasn’t at all noisy when I visited. Friendly staff willing to answer questions. Although I don’t know a lot about different tea varieties, I do prefer loose leaf teas, and was almost overwhelmed by all the different kinds they offer. Definitely recommend to any tea lovers out there!

I visited Goldfish Tea on a whim. I happened to be in the area and stopped in to see what they had to offer.

They’re in a nice location, no parking out front, but you can head around to the side and it’s not a very lengthy walk. Once inside, it’s very cute. A mix of urban and Chinese style. There are tables scattered throughout the surprisingly large space. One wall displays the (somewhat dusty) tea sets for sale. There is a large variety, not just the traditional Japanese style, but more modern teaware as well.

I don’t get out this way too often, so I picked up two different teas: the elusive pu-erh and the osmanthus oolong. Both were prepared with the tea in tea sacs so that I could resteep them as desired. I allowed both to steep for about 3 minutes, then pulled the sacs. I was really impressed with both teas. (Reviews under the teas themselves.)

Overall, this was a really nice tearoom. (They are now selling coffee as their sign out front proclaims.) The woman who waited on me told me that they do tea tastings, three teas with three steeps each. You only need to call a day in advance to schedule it. It sounds like a lot of fun and I, for one, will give it a try one day.

Goldfish Tea really knows what it is doing. The prices are a bit high but I’ve never seen a tea house that can equal it (note that if you bring a travel mug the prices are lower). The owners’ passion for tea and China is evident from the second you step in the door. The decor is impressive, with substantial hardwood furniture from China throughout the store and teapots and statues lining the walls. It is one of the very few shops I have seen with any pu-er tea, but it goes further and provides several choices of both cooked and raw.

They also offer free tea tastings, which is pretty incredible to me. They prepare three different teas of your choice – typically a green, an oolong, and a black – and steep each three times. The whole process takes about one hour, during which the guide will also discuss the teas offered and answer any questions the group has about tea.

The shop’s limitation to only Chinese teas is a bit curious at first, but it seems that their Chinese contacts are central to their business and they would rather be experts at everything they sell. They also do not offer milk for tea. Despite being limited to Chinese teas, the selection is far greater than any other tea shop I have seen around here, but I still would have liked to see a couple from India at least. They also serve locally roasted coffee, which smelled excellent. I had the iced coffee and it was very flavorful, with hints of chocolate and cherry and a slightly bitter finish. My family reported that the smoothies were very good. The one other quibble I have is that they recommend 3 minute steeps for all teas, where I feel that half that is enough to bring out the flavor of greens without the astringency.

This place is awesome! I never knew the U.S. had strictly tea houses until I stumbled upon Goldfish. In many ways Goldfish is unique, one of the main reasons is because they import all of their products directly from China. They do not use distributors. This means their rep. in China chooses teas for the menu that she tries right on the plantation’s doorstep, which she then purchases and ships right to Goldfish. Sweet.

I was downtown in Royal Oak looking for a job at a bar or restaurant when I found this place. Being a Tea person, I was happy to see they carried my beloved Dragon’s Well on their menu and ordered a cup. I ended up chatting one on one to the owner Jim for over an hour about our love of tea. Today I work here, so please come in and say Hi!

Great place for anybody, whether you are looking for a refreshment, a pick me up, or a pleasant atmosphere to talk.